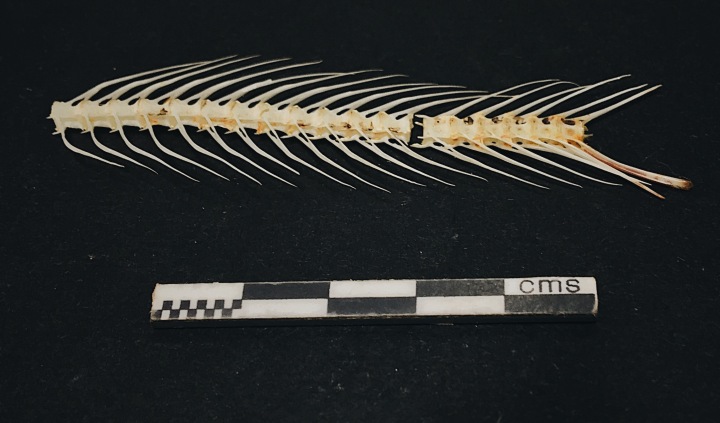 Well, as someone who seems to have been knee-deep in fish bones since 2014, I’m glad you’ve asked! Let me preface this by saying my area of expertise is North and North-east Scotland – so the Orkney Islands and the Covesea Caves. And this is based on my experience as well! So I might miss out on some more common fish finds. But here are the common fish remains that I seem to run into time and time again.

The bane of my zooarchaeologist life…the reason why I strained my eyes during my masters dissertation…the fish that made me hold my breath while I worked because a sigh could easily send the vertebrae flying…let me present to you: the Atlantic herring.

Not necessarily something I find in abundance at my sites, but I’ve found a couple (read: about one hundred bones) here and there. It’s also found on the other side of the Pond!

Not necessarily the bulk of many of my fish bone assemblages, but I find that the pollack shows up time and time again – especially pollack vertebrae! Of course, the vertebrae of  a fish are some of the most durable parts of a fish’s skeleton – that’s why you will see them more commonly than other, more fragile bones. 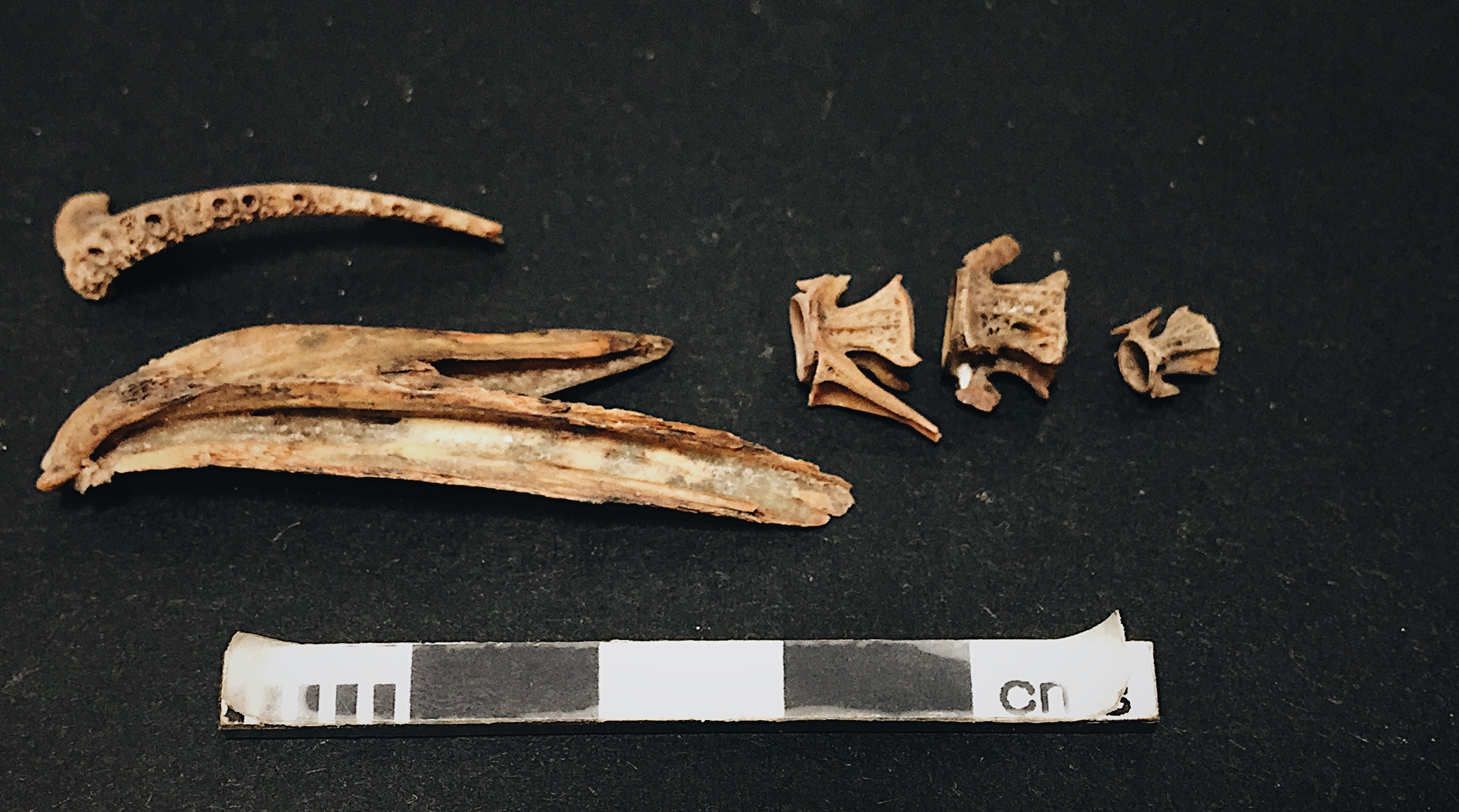 Similar to the Atlantic herring, the whiting has also caused me much distress due to the tiny size of its bones. Very common in some Iron Age contexts that I’ve worked in, the bones of a whiting are so small that I’ve had to use a scanning electron microscope to analyse them for butchery marks and signs of erosion! Not to mention the many hours I’ve had to move their bones around with tweezers…fish bones are surprisingly hard work. 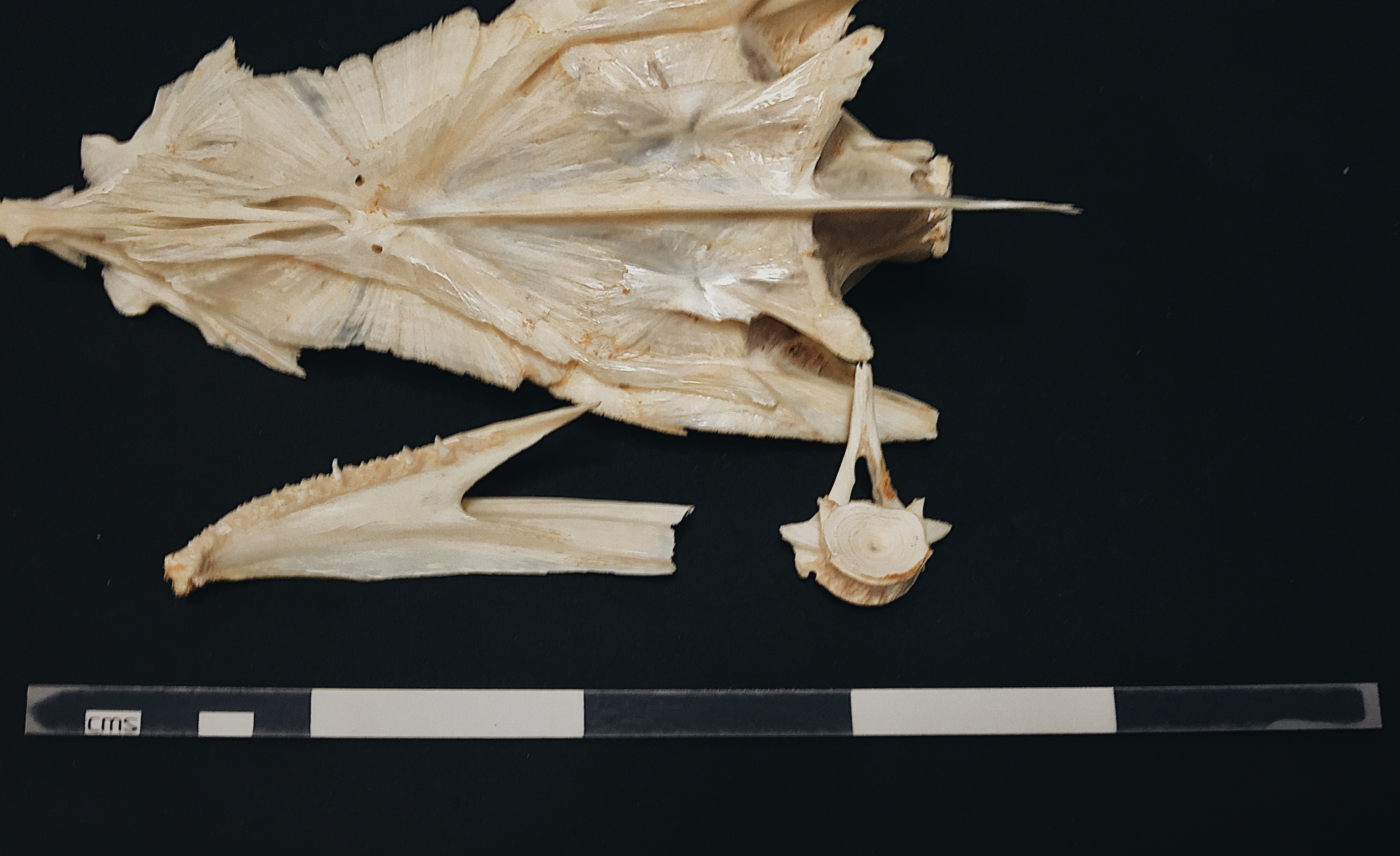 Last, but not least – especially not least – is my good friend, the Atlantic cod. Surprisingly one of the most common fish bones I find at sites! So common, in fact, that it’s the easiest fish for me to identify by eye. But maybe that’s not so surprising – after all, cod is still one of the most popular fish for food! And I don’t blame people, I do really enjoy fish and chips.

Remember to send me any questions or topics you’d like to see me cover about zooarchaeology or archaeology by contacting me! 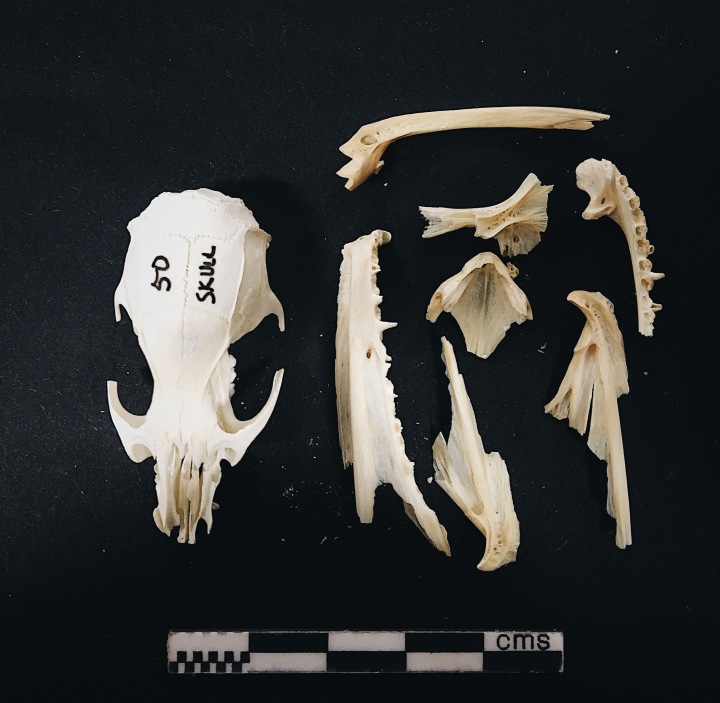 Yet another minipost in my comparative anatomy series! But this one might be the strangest paring of all.

Rodents and fish – could there be any more different animals? And yet, I find that students just starting out in archaeology tend to confuse the two together. To be fair, it’s very understandable – the size of rodent bones can be comparable to the size of many fish bones. So let’s break it down and see how different they really are. 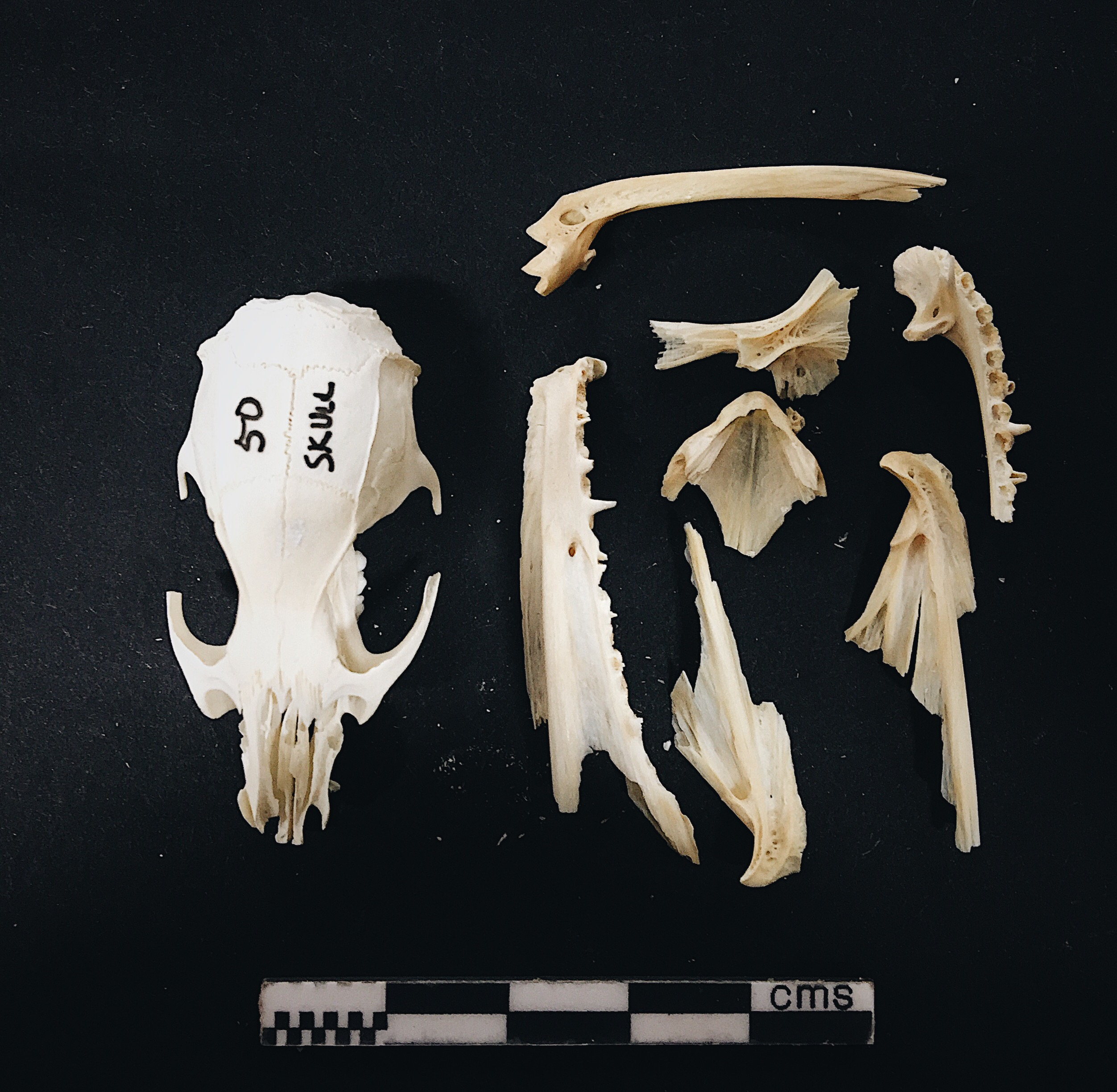 For starters, let’s look at the cranium of a rat (left) and an Atlantic cod (right). As you can see, most elements of the skeleton look completely different. The rat has the sort of skull you would expect to see with any animal, while the fish…well, fish are basically made of a head and a tail, so most fish bones you find will be part of the cranium. As I’ve mentioned before in my previous post on fish bone, they will also have a different sort of texture and look compared to mammal bone – in my opinion, its a very “fish-like” texture, a bit shiny and flaky. Always a good giveaway that you’re dealing with a fish!

So how is it possible to even confuse the two? Well, let’s look at something a bit trickier…here’s the vertebrae from a rat (left) and from a fish (right). Now, if you don’t know that there’s a difference in shape between rat and fish vertebrae, you might not be able to differentiate the two right away. And given how weird vertebrae can be in varying shapes between types of vertebrae in an individual body, who knows! Maybe they’re from the same animal?

Luckily, there is a visual difference between the two. Rat vertebrae look relatively similar to any other mammal vertebrae (“relatively” being the key word here, of course…but talking about the differences in mammal vertebrae is a post for a different day!). Fish, on the other hand, have very distinct-looking vertebrae and vertebral bodies. Unfortunately, distinguishing between the two can be more difficult if the vertebrae are more fragmented – I’ve seen many students get the two confused if most of the vertebral arches and “wings” are missing.

“But Alex!” I hear you say, “these bones look so different, I don’t believe that anyone could get them confused!” Okay then…let’s take two random, slightly fragmented bones from a herring and a mouse then, shall we?

As you can see, it can get tricky! Fragmentation, size, preservation of bone – these are variables that you encounter with archaeological bones that make things a bit more challenging than you’d think! The best way to get better, of course, is to practice, practice, practice. It gets easier…

Well, not all archaeologists…

Here’s the thing about fish bones: they can, and will most likely, be small and fragile in your assemblages. How small and fragile? So small, if you sneeze you might blow a couple hundred of them off your finds tray. So fragile, you might snap a few with a tweezer.

So not the most fun thing in the world to work with. And I should know. I did my MSc dissertation on analysing thousands of them for three months.

But let’s give credit where credit is due: fish, as annoying as they can be to work with, are vital to understanding the archaeological record. As with other animal bones, fish bones can tell us a lot about the diet of the inhabitants of a given site.

But this is just the tip of the iceberg! Fish, like many other animals, can be utilised in ways beyond food (i.e; fish oil). To further investigate this, we can analyse pottery and other artefacts for traces of oil. By identifying and quantifying the specific bones, we can also determine what inhabitants were most likely doing with the fish – if there are many fish head bones, for example, then the processing of the fish was most likely performed here. No fish head bones and a landlocked site? Maybe the fish were caught and processed elsewhere, and then traded to this settlement! Looking into fish species, we can also see how the fish were caught. Once we identify the bones to species, we can look at their seasonality and where they normally are located within a body of water (coastal? deep sea?), which can tell us a lot about hunting techniques and the technology that must have been employed to catch them. This is also very important if there’s a lack of fishing-related artefacts, but fishing is suspected.

Fish can be a difficult animal to work with in archaeology. As I mentioned before, fish bones can be very small, which makes identification and handling very difficult! Unlike other animal bones, which often at least have some semblance to human bones that make identifications a bit easier, fish bones often look very alien! They are also very fragile, which means preservation is often not very good.

After working with them for a summer, however, I’ve come to realise how important fish bones are to the archaeological record and how easy it is to take them for granted! So here’s to you, fish bones – you are very annoying to work with at times, but also incredibly helpful and important!

The University of Nottingham has an amazing fish bone reference website that has saved my neck a few times during my research.

The North Atlantic Biocultural Organisation (NABO) also has a fish bone manual that may be handy for recording bones.